Those of us who live in California are getting a bit tired of the unending rain. We’re ecstatic, of course, over the apparent end to our five-year-long drought, but enough is enough. I have to check the weather sites and watch the “motion radar” every few minutes just to determine whether it’s safe to take our dog out without walking into a deluge. The lakes, streams, and reservoirs are getting full now – some dangerously so – and we could all use some sun exposure.

When I was young, full lakes and the promise of spring meant one thing to our family: fishing. We never took fancy vacations, but we spent many a Saturday or Sunday throwing worms or minnows into a host of Santa Clara Valley reservoirs hoping to bring home bluegill, crappie, bass, and catfish. Mom packed a picnic basket full of salami sandwiches, potato chips, and Cragmont sodas. Dad spent much of his time untangling our lines, and he and my brother ultimately had the task of cleaning and filleting the fish. (We ate everything we caught.) Once in a great while we would rent a cabin up at Fallen Leaf Lake in the Sierras, and Dad would take us out in the early morning chill to fish for trout. I remember that he used to sing or whistle the Army’s “Mess Call” (“Come and get your chow, boys”) so the trout would bite. In the early days, I believed that that worked. I will never forget the taste of fresh rainbow trout, right out of the water, wrapped in bacon for breakfast.

Meanwhile, we also loved to form clubs devoted to our youthful pursuits, and as luck would have it, I still have the “minutes” to two of those clubs. One of them, The Tibby Club, was dedicated to my grandmother’s dog, an adorable but spoiled and yappy Lhasa Apso whom we revered. The other club was The Fishing Club. We were a little older then, so the minutes were, of course, typed.

The year was 1969. The meetings took place in our house in San Jose. I was 13 years old, my brother Marc was 11, and our beloved but beleaguered (you’ll see what I mean) little sister Janine was 8.

Please note that although there were four meetings, all of them appear to have taken place on the same day. Then the club completely fell apart in acrimony.

I don’t believe I need to say anything further. I have re-typed the minutes precisely as they originally appeared. They speak for themselves. Enjoy.

The meeting was called to order by Paula at 8:25 a.m. All were present.

This was the first meeting. The list of club duties was passed around.

Next, we voted on the place to go fishing. The area that came in first will be presented to our parents and if they disagree, the others, in order, will be presented to them. Lexington was first with 11 points, Mt. Hamilton second with 9, Coyote and Chesbro with 5, and Anderson is the alternate.

Then we decided on date, time, bait, and other articles which will be on the plan. Paula will type the plan.

The main duties and functions of the fishing club are as follows:

The meeting was called to order at 12:37 p.m. The minutes were read.

There were no corrections. There was no old business.

Paula read the fishing plan. No corrections were made.

Janine suggested that we have a suggestion box. This was voted down.

Paula informed Marc that, as manager of the equipment, he must obtain a notebook for the club.

Marc suggested that we should collect dues every once in a while to pay for certain fishing gear we could buy. Paula added to this and said that the equipment manager should present something new we might get at every meeting and we could vote on these presentations.

It was decided not to present the parents with our plan today, but wait.

The meeting was called to order at 2:24 p.m. The minutes were corrected by Janine, who said that the opinion she gave of the problem that she and Paula would fight over the lures, etc. we buy was not included in the minutes. However, since this was only part of the discussion, and not a suggestion, it does not have to be included in the minutes.

Janine, the frog-keeper, was called upon to report. She said that she was going to ask the twins (Chris and Dan Sears) to take care of Toby, the frog, when we go up to Fallen Leaf Lake on Saturday. The twins weren’t home, so Marc will call them later.

Marc, the equipment manager, was called upon to propose some ideas on things to buy. He suggested a bass/crappie jig, some split shot, some #8 hooks, some #2 hooks, or a plastic worm. We voted on the split shot. We will pay, as individuals, 8¢ for 20. It was agreed that anyone who loses a lure, etc. will be unable to use the others.

There was no old business.

We then chose some projects to undertake. Marc will write to the Fish and Game Department and ask if there is anything we can do, such as putting up posters. I, too, will write to them and tell them about the bad situation at Ed R. Levin Park.

Marc then read the portion of the fishing regulations that tells about night fishing. We discovered we cannot night fish at lakes here.

We decided that Janine should put up posters saying to come to our house for information on local fishing. Janine refused and was kicked out of the club.

The meeting came to order at 9:44 p.m. The minutes were read. There were no corrections.

There were no new developments on the frog. The equipment manager had nothing to report.

There was no old business.

Janine orally took an oath, then signed a written one, which enabled her to come back into the club. This was done because Janine tattled and Mom said that if we didn’t let her in, we couldn’t have a club either. Mom also said she did not want any posters to be put up so we’ll have to think of a new project for Janine.

Marc got a notebook during the meeting.

It was decided that we will write our letters tomorrow if possible, and if not, as soon as possible when we get back from vacation.

We voted on a suggestion made by Paula and Marc. The club shall temporarily be closed to further membership. However, if one of us would like a new member to join, the person would have to be approved by every other member. 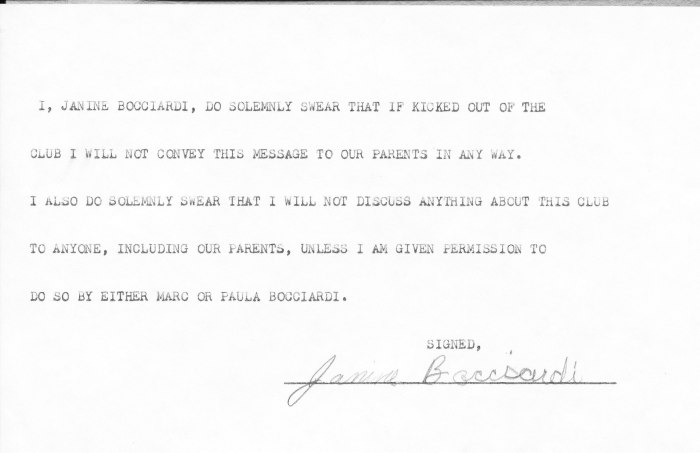 I hope you enjoyed that peek into the past. Meanwhile, for those of you not on Facebook, I have some blogging news. I am now the official blogger for the San Francisco Giants on a website called “Sports Spotlight.” If I think any of those blogs might be of interest, I’ll include the links at the end of my Monday Morning Rail posts.

On whether Barry Bonds should be in the Hall of Fame: http://sportsspotlight.com/blog/boys-bay-021317/

Paula B I am a long-time San Franciscan with the emotions of an Italian (my father's side) and the organizational prowess of a German (my mother's side). I play drums in an alt/country/rock band, go to all Giants home weekday games, and have a dog named Buster Posey. Every year I take at least one major road trip and one major train trip. Americana is my thing, and I love this country like nobody's business.
Published February 19, 2017February 22, 2017

Life In A Word

Moments to brighten forgotten gems of the English language

An Arts-Filled, Tasty And Sometimes-Loopy Jaunt Through Life

Parenting In The Thick Of It

Introducing You to Your Own Inheritance