It came to mind recently that although I’ve filled many drawers and shelves with diaries, journals, notes, correspondence, and more than a few published articles, I never seemed to be very prolific as a poet. In fact, after much searching for the past couple of weeks, I’ve been able to unearth only the following six works, all written in my childhood. And now I know why no one encouraged me to pursue the poetic arts any further.

This first gem is actually one of three songs I wrote as a youngster, all of which have specific melodies. Because I’m unable to reproduce the tunes here, I thought I’d figure out their closest approximation. After all, they must have sounded like some nursery rhyme or popular children’s song at the time, correct? But I gave up after spending a couple of hours online, listening to at least 50 classic children’s songs. None sounded familiar.

Believe it or not, I then tried singing the songs (sans lyrics) into the Shazam app, hoping that somehow the melodies would be recognizable. Uh, no.

Finally I did what I often do in these situations – I called my sister Janine. But she could not pinpoint my musical influences, either. These must have been original melodies I came up with!  I was obviously a genius!

As for this first song and its lyrics, neither Janine nor I could imagine how I came up with the idea of three men in a bottle. Our best guess is that I was influenced by the literature I was reading at the time:  “Run-a-Dub Dub, Three Men in a Tub.” Which makes a lot more sense than three men squeezing into a bottle – full of whisky, no less. My father used to drink whisky “highballs,” a classic cocktail, so maybe that’s what was on my mind.

[a nursery rhyme with a lilting melody]

Three men went out in a bottle to sea
And it was full of the drink wiskey,
But when they got there they all drowned
I think the bottle has not been found
So please, unless you’re less than 1 pound
Don’t try to sail, unless what you’re in is round.

I tried songwriting again the following year, and I’ve wrestled with whether I should publish it, because it deals with my brother Marc accidentally walking in on my sister when she was taking a shower. It seems a little odd that I would write about this incident, but I did.

[belt this one out with gusto]

Janine took a shower this morning.
She got water all over the floor,
She got soap all over the soapdish,
And she forgot to close the door!

Marc walked into the shower
And he saw her standing there.
He looked at her in amazement
’Cause he’d never seen her bare!

My final tune is a bit of a cross between a folk song and a wartime march.

We had just moved into our new house in East San Jose, and at the end of our street stood an orchard followed by rolling hills. I couldn’t stop wondering what lay beyond those hills (answer: more hills). This became an obsession, so I composed a song about it.

My sister nailed my style and influences when she reminded me that when I wrote the song I was squarely in the middle of my “New Christy Minstrels period.” I was quite enamored with large groups of folk singers.

And I will add that my appending the “boys” to the end of each line is reminiscent of those World War I and II songs about soldiers leaving for, or coming back from, battle.

Obviously I liked mixing my styles, so I will call this song a “pastiche.”

[sing this song in a rousing manner]

Do you know?
We will go,
And we’ll see,
You and me.
Yes, we will
Climb that hill
And we’ll look dowwwwwwn.

Although I was done writing songs, I did continue to churn out a few poems. This one was a Catholic school assignment. I was already in the seventh grade, so the real travesty was that I still had to go to bed at 9:00!!

Over and over my dad has said,
“Paula, it is time for bed!”
How I dread the hour of nine
When I begin to beg and whine,

“But Dad, please, just a little more?”
And that’s when he gets really sore.
So I, not making one more peep,
Go up to bed, and fall asleep.

I wrote this poem on the eve of my starting “Driver’s Training,” which in those days was a short high school course that involved hands-on experience behind the wheel. My course was taught by football coach Ron “No Neck” Locicero. He took us up in the East San Jose foothills and was actually very kind, even though he was forced to use his extra set of brakes liberally when I was behind the wheel.

The poem was published in the January 14, 1972, edition of our high school newspaper The Legend. Of course, it wasn’t difficult to get my own works into print, since I was the editor of said paper.

O Horror of Horrors! I grieve in sorrow;
I wish I never could see tomorrow,
For when 3:30 comes I start Driver’s Training.
What if it’s windy? What if it’s raining?
What if I make a jillion mistakes
And he always has to slam on the brakes?
Everyone knows I’m the world’s biggest clutz –
The whole Driver’s Training Department is nuts!
They decided to risk it and hand me the wheel.
It seems they don’t value their automobile.
What if I step on the pedal too hard
And we end up in somebody else’s backyard?
I’m so absent-minded I just may forget
That I’m driving a car, and I’ll daydream, I bet!
I’m no big speed demon, the world will soon see.
Ten miles an hour is the limit for me.
Oh, no, I don’t panic, just go in a coma.
They may have to revive me with some strong aroma.
I don’t want to look like a stupid old fool
Nor be laughing-stock every day I’m at school.
They said, “Don’t be scared, Paula, you’ll do all right.”
But I have to drive at 5:30 at night!
The world will be dark. Is it like being blind?
What if I hit some poor guy from behind?
“It’s only 9 days – they go pretty fast.”
Oh sure, but I do hope my teacher can last.
My friends have no mercy. This whole bit they’ve seen.
Don’t they know what it’s like to be only sixteen?
“What about college? You won’t want to hike!”
You’re right, but I’d rather stick with my bike.
I guess I’ll live through it. I just hope I don’t kill
Some innocent soul. I keep thinking I will.
Yikes! Here comes the teacher! My heart beats no more.
Oh, what did I ever get into this for?
There’s just one thing to do. I look at the sky
And plead with Him, “God, oh, I’m too young to die!”

I didn’t even remember the following poem until my sister – who actually recalled most of the first stanza! – pointed out that she had once tried to set it to music. An accomplished banjo and guitar player by the time she was 12, she apparently wrote a melody for this poem “using a lot of minor chords.” Unfortunately she doesn’t remember the tune, but she claims that it was truly terrible, which I strongly doubt.

As for my influences at the time, I would have to say that they were a mixture of William Shakespeare, John Dunne, and whoever wrote “The First Time Ever I Saw Your Face.”

This cool, tranquil, weightless night
A star begins to die
In quiet, pulsing, choking gasps.
And I must say goodbye.

In young, confused and awkward grief
I watch the lonely light
The sky gives up its ghost; the star
Plunges out of sight.

If time would just dissolve this knot
I’ve never overcome –
But I, in muted silence, stand
Embarrassed, frightened, dumb.

O God! If man is so supreme
Then why am I so weak
That those whom I adore the most
Have yet to hear me speak?

I cannot catch my tortured breath
Or cool my heated head;
I cannot purge my heavy heart
Of all I’ve left unsaid.

I love you, friend, though through it all
I gave you not a sign.
If all you saw were pleading eyes
’Twas not your fault, but mine.

Could this be any more overwrought??  Then again, I guess that’s what being 17 is all about, isn’t it? ℘

Due to popular demand, I am including, at the end of each blog post, the latest random diary entries that I’ve been posting on Facebook for “Throwback Thursday.” These are all taken absolutely verbatim from the lengthy diaries I kept between 1971 and 1987.

“Monday night I had my first driving lesson [with my parents]. I don’t want to make a complete fool of myself, with my uncoordination and absentmindedness and stuff. I get so nervous. So we took the truck. I was scared to death. I jerked on the brakes a little. It’s hard to know how far down to push them or the accelerator. And sometimes I forgot to change the gear shift. I think I got up to about 9 M.P.H. but was scared. I thought about 4 M.P.H. was a safe speed.”

Finally, as a reminder, our band, “Hotter Than Helga,” will be playing in Fairfax at 19 Broadway on Thursday night, September 14. (I play drums.) If you like alt/country/rock/Americana music, come out and have a listen!! 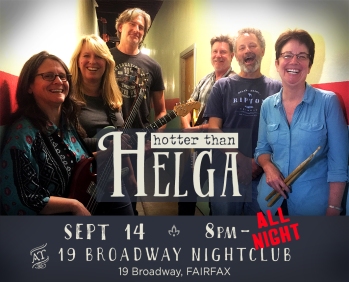 Paula B I am a long-time San Franciscan with the emotions of an Italian (my father's side) and the organizational prowess of a German (my mother's side). I play drums in an alt/country/rock band, go to all Giants home weekday games, and have a dog named Buster Posey. Every year I take at least one major road trip and one major train trip. Americana is my thing, and I love this country like nobody's business.
Published September 10, 2017September 10, 2017